Pollution & How it Affects You? 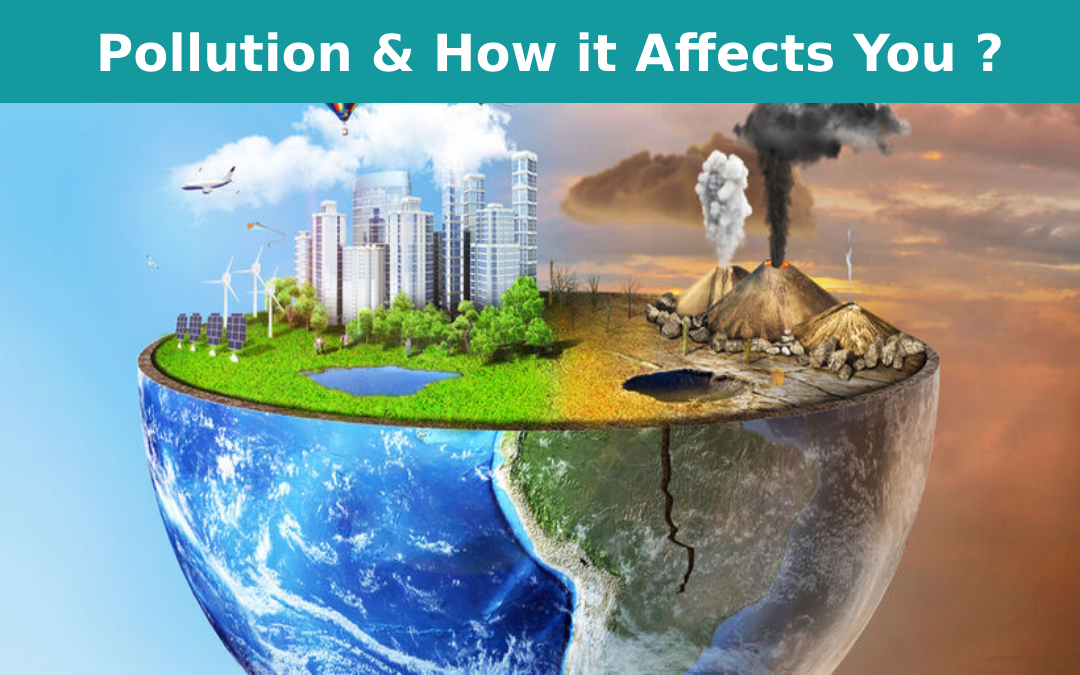 Since we share everything on Earth with every living thing on the planet, what happens in one area affects everything too, no matter how far away. Pollution or the introduction of different forms of waste materials in our environment has negative effects on the ecosystem we rely on.

There are many kinds of pollution, but the ones that have the most impact on us are Air, Water, and chemical pollution.

The Consequences of Pollution

How does pollution affect humans? In the following paragraphs, we will enumerate the consequences of releasing pollutants in the environment.

We cause most of the pollution and we will suffer the consequences if we don’t stop. We are already seeing its effects in the form of global warming, contaminated seafood, increased cases of lung diseases and more.

We release a variety of chemicals into the atmosphere when we burn the fossil fuels we use every day. We breathe air to live and what we breathe has a direct impact on our health.

Air pollution is the world’s 4th most lethal killer

Air pollution is the cause of 8.9 million deaths globally every year. That means that every 4 seconds, someone somewhere on the planet dies from air pollution. The UN has called air pollution the world’s worst environmental health risk.

Air pollution and climate change are closely linked. The main cause of air pollution as well as climate change (CO2-emissions) is the burning of fossil fuels (oil, coal, gas). A change to greener alternatives such as solar or wind power will therefore help both the climate and human health.

The burning of fossil fuels and the release of carbon dioxide in the atmosphere are causing the Earth to become warmer. The toxic chemicals released into the air settle into plants and water sources.

Animals eat the contaminated plants and drink the water. The poison then travels up the food chain to us.

Just like the air we breathe, water is vital to our survival. We need clean water to drink, to irrigate our crops and the fish we eat live in the waters. We play in rivers, lakes and streams. We live near bodies of water.

It’s a precious resource that can easily be polluted and the contamination can be transferred to us and affect our health.

The consumer society is powered by water

Everything we buy, use, eat takes water to produce. Our total use of water through the stuff we buy is represented by “The water footprint”. The global water footprint is 9 trillion tons per year or almost 300,000 tons per second.

The consumer society is getting more and more thirsty

Global demand for freshwater is projected to increase 55 % between 2000 and 2050. By 2050, it will reach a massive 5500 square kilometers or 5.5 trillion tons. The main sources for the rise in freshwater use are industry and manufacturing with an expected increase of 400 %. In addition,  water demand from electricity-generation will increase 140 % and domestic use 130 %.

The pollution of groundwater resources is increasing

Plastic wasn’t invented until the late 1800s and the production of plastic didn’t take off until around 1950. But then it really took off. The world has produced over 9 billion tons of plastic since around 1950. 6.3 billion tons (over two thirds!) of this plastic have ended up in the environment – including our oceans.

By 2025, there will be a staggering 100 bags of plastic for each foot of coastline in the world!

At this point, the ocean will contain around one ton of plastic for every three tons of fish. By 2050, there could be more plastic than fish (by weight) in the world’s oceans. Just imagine.

Diseases such as amoebiasis, typhoid and hookworm are caused by polluted drinking water. Water polluted by chemicals such as heavy metals, lead, pesticides and hydrocarbons can cause hormonal and reproductive problems, damage to the nervous system, liver and kidney damage and cancer to name a few. Being exposed to mercury causes Parkinson’s disease, Alzheimer’s, heart disease and death.

Water pollution affects marine life which is one of our food sources. We live in an ecosystem where the action of one has the potential to affect the many. This can be a good or a bad thing, depending on what the action is. Our mistakes have polluted the environment that we live in and we are waking up and owning to the fact.

We are trying to reverse the damage. The good news is that every positive action counts. The small effort you make towards a greener environment can start a healing ripple effect. We may still save what is left of our natural resources and make the world a better place to live in for our future generation.

We are determined to take on the challenge of helping to solve a complex global health crisis caused by pollution. By combining the best technologies available, we offer unparalleled water quality that allows your body to heal from within.

We use an evolved 10-Stage Complete Filtration + Restoration process that revives water to its original unspoiled condition, the way nature intended it to be. Our process removes all the impurities that humans have put into our drinking water and then remineralizes with beneficial ions! This results in a high pH and a low desired TDS composed of magnesium bicarbonate with traces of calcium and sodium bicarbonate, as well as silica and chloride.

TRY THE ONLY SYSTEM THAT PRODUCES PROPERLY MINERALIZED WATER THAT IS 100% FREE OF UNDESIRABLE ACIDS AND CONTAMINANTS.